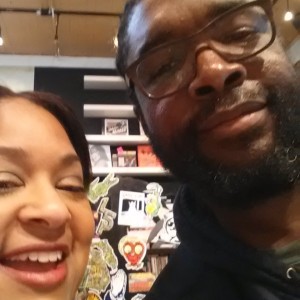 Last year was the year of the selfie and I got some really good ones.

So go ahead and touch someone (or yourself) as we reflect on 2013.

I moderated an International Music Conference panel discussion on publicity.

I did makeup on a film set for the first time. More to come…

I met a really nice guy with whom I have A LOT in common.

I talked to CeeLo again in a brief, but meaningful conversation.

I got a quick interview with Erykah Badu.

I got a good sit-down interview with MC Lyte.

I met people living in other countries that are better at keeping in touch with me than people a few neighborhoods over in ATL.

I was blessed with a new career opportunity very late in the year.

Finally, I took a selfie with Questlove.   Yes, ?uestlove.  Quest-freaking-love, the drummer of the Legendary Roots Crew that I’ve jammed to before Fallon, before he was named Time magazine’s coolest person of the year and long before the global acknowledgment his group are hip-hop’s preeminent, improvisational, badasses.

That, as the kids say, was everything.