On social media and live discussions, I see the ways that the commentary on Cardi B’s rise to fame is clouded in sexism. It’s one thing if you don’t like her music, it’s another thing if you just hate her for who she is. If you hate the sound of her NY, Latin-accent over trap beats, cool. If you just think her whole shit is wack, cool.

But, don’t let her nontraditional path as a stripper-turned-social media magnate-turned-reality star-turned-rapper trip you up. She used what she got to get what she wants in the post-record label music industry. I even saw her pitted against Lauryn Hill and even SZA, as a ridiculously contrarian argument against her “undeserved” prominence. They, to some, represent “respectable” ways that women artists can get on. Sure, they never hit the pole or did reality TV (hell, for Lauryn, that would have meant The Real World or Road Rules), but they pushed through lots of behind-the-scenes turmoil to carve out their careers.

While I’ve changed, I get what some of those people mean, sort of. I was once someone that you could call a “purist” and that shit was cool for about a month. Yes, it helped identify me among men as the “rare” woman who knew about “real” hip-hop. It was super limiting. Not just as a writer, but as an individual living in Atlanta since the latter half of 1999. The A had emerged as not only hip-hop’s epicenter, but a place where even famous and established artists made themselves accessible to fans and media.

If you were a regular in the clubs, or simply lived in Atlanta long enough, ultimately you would have a close encounter with a rap star, or know somebody, that knows somebody, that knows somebody who went to middle school with one of your favorite artists.  The degrees of separation were quickly made small from social media. My personal social and professional experiences changed everything. When I lived in Pittsburgh, I didn’t write about hip-hop culture. I was content to keep about four hip-hop albums in steady rotation. It wasn’t until I came to Atlanta and the allure of the culture was not only irresistible, but connected to legitimate professional opportunity. My brother gave me the Aquemini album as a going away present. Little did he know that was the start of something much bigger.

Old habits die hard. It even took me a long time to become an actual Jay Z fan. Like, Black Album late. I rejected the whole drug dealer turned rapper narrative. In my once limited view, the rappers I listened to like The Roots, still my favorite band to this day, A Tribe Called Quest, The Fugees, and The Pharcyde maybe smoked a little weed, but they’d never advocate selling it. Prior to his very public relationship with Beyoncé, I thought Jay Z hated women. I’d even laughed about rumors that he was “the gay rapper,” a label for hip-hop’s disdain of the possibility that a prominent member of the culture could have same sex attraction; long before LGBTQ became an undeniable force, long before acceptance of queer artists like Frank Ocean, Tyler the Creator and Syd.

By my first visit home to Pittsburgh after moving to Atlanta, one of my best friends laughed at how much I’d grown to love Trick Daddy’s “Shut Up.” And in no way was I immune to back-bending reflexes caused by Cash Money takin’ over for the 99 and 2000 as I happily “Backed that Azz Up” with Juvenile.

I couldn’t help but open up and embrace change. And even after all my logic and my theory, I added muthafucka so you ignant niggas hear me. I’m aware of my own contradictions. I’m still very critical of hip-hop culture. I definitely think there are too many toxic elements that foster violence, racism, sexism and flat out anti-intellectualism, but I won’t discredit artists just because they didn’t follow what some outmoded thinking, so-called purists deem as an ideal career trajectory.  People are quick to dismiss Cardi B despite her unprecedented accomplishments and attribute all her lyrics to  ghostwriters without proof. Nothing makes you sound like a tired old curmudgeon more quickly than finger wagging at what younger artists and hip-hop fans are doing. So if you don’t fuck with Cardi B, cool, but don’t get mad ‘cause she made it the best way possible.

Several people have asked for my opinions on the most recent developments in hip hop culture, largely Jay Z, Beyoncé and the omnipresent ghetto vortex we call the trap. Here is what I see.

I have always been vocal about problems in hip hop culture because I understand hip hop culture. Since I was a child in the 80s watching boys breakdance in the playground rec center, to being a writer, music conference panelist and weekly hip hop trivia winner, I’ve been an active participant. Through hip hop I’ve found love of the people and the music while gaining professional opportunities.

Still, I must proceed with caution.  Don’t let the conversation become too unflattering. If you do, you are not a cultural critic, you’re a bitch.

Somehow, you cannot, like I do, simultaneously celebrate your colleagues and influences – who are overwhelmingly male – yet criticize the looming presence of misogyny, sexual assault and violence. If so, you have to consciously and subconsciously hate men on some level. For too many members of the hip hop loving public, support means blind allegiance, ego-stroking uplift and ass-kissing deference. You can speak out but carefully contextualize your conversation so as to not appear finger-pointing and frequently pepper it with “I know not all men, but…”

The thin line between love and hate shows up in loving the people who make the music while genuinely hating the hell out of the negative shit they either directly or inadvertently perpetuate.

Please. If you’re a male who believes in fidelity, good parenting, self-respect, dignity and generational wealth, speak up. No one wants to listen to bitches like us. 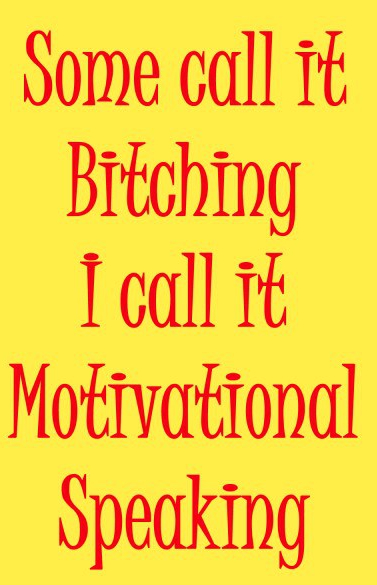